Disclosure: This website uses affiliate links. That means we may earn a small commission when you use the links on this site to book a hotel, book a tour, buy your travel insurance, shop for travel essentials, etc. You don’t pay anything extra. We’ve made an effort to ensure all information on this website is correct at the time of writing, but expect readers to double check before booking.

Offering breathtaking views of Budapest, Fisherman’s Bastion is a favorite Budapest attraction. Any time of day, you’re likely to find plenty of locals and tourists here, all enjoying the spectacular view.

From mid-day until sunset, you’ll find the Bastion at its busiest. At the height of the day, people jostle for the perfect photo between the Bastion’s lovely arches.

If you want to avoid the crowds, arrive early or come after dark. On past visits to Budapest we’ve enjoyed staying in this area for exactly this reason!

Fisherman’s Bastion is only one of many attractions in the Budapest Castle District. While up here, be sure to check out Matthias Church, the Castle Hill Funicular, the Changing of the Guards, and Buda Castle!

You can also enjoy nice views from here of Parliament and the Budapest Chain Bridge.

What is Fisherman’s Bastion?

Despite how it looks, Fisherman’s Bastion isn’t all that ancient. In fact, it was built at the end of the 19th century as part of the Hungarian Millennium celebrations, which marked Hungary’s 1000th birthday.

The architectural style, however, is medieval. It’s meant to evoke the era of Hungary’s founding, 1000 years prior. Fisherman’s Bastion is built in a Neo-Romanesque style, with a romantic, fairytale like feel to it.

Likewise, Fisherman’s Bastion was never intended to serve as a fortification. In fact, its architect hoped it would become exactly what people use it for today: a viewpoint.

Buda Castle District was fortified at one time. Construction of Fisherman’s Bastion, however, marked a purposeful pivot away from fortification.

But if you’re in the market for stunning views over Budapest and a great backdrop for your holiday photos, Fisherman’s Bastion is the spot!

What to See and Do at Fisherman’s Bastion

There is a lower terrace, which is free, and an upper terrace, behind a turnstile that requires tickets.

There are 7 towers at Fisherman’s Bastion. Each tower has a statue of one of the original Hungarian chiefs responsible for settling the Carpathian basin in 895. This marked the birth of the Hungarian nation.

You’ll also see St. Stephen depicted in the square in front of Fisherman’s Bastion. St Stephen was the first king of Hungary, ruling from 1000 to 1038.

At the bottom of the stairs leading up to Fisherman’s Bastion, you can see statues of John Hunyadi and St. George, with a dragon.

Hunyadi was a 15th-century military leader and politician. His statue is the one with the impressive moustache and the sword staked into the ground. You can also see Hunyadi at Heroes Square. His namesake park, Hunyadi Ter in the 6th district, is a lovely urban park with a great Saturday farmers’ market.

At the top of the stairs under the arches, you can see statues of 10th century-era soldiers standing sentry. 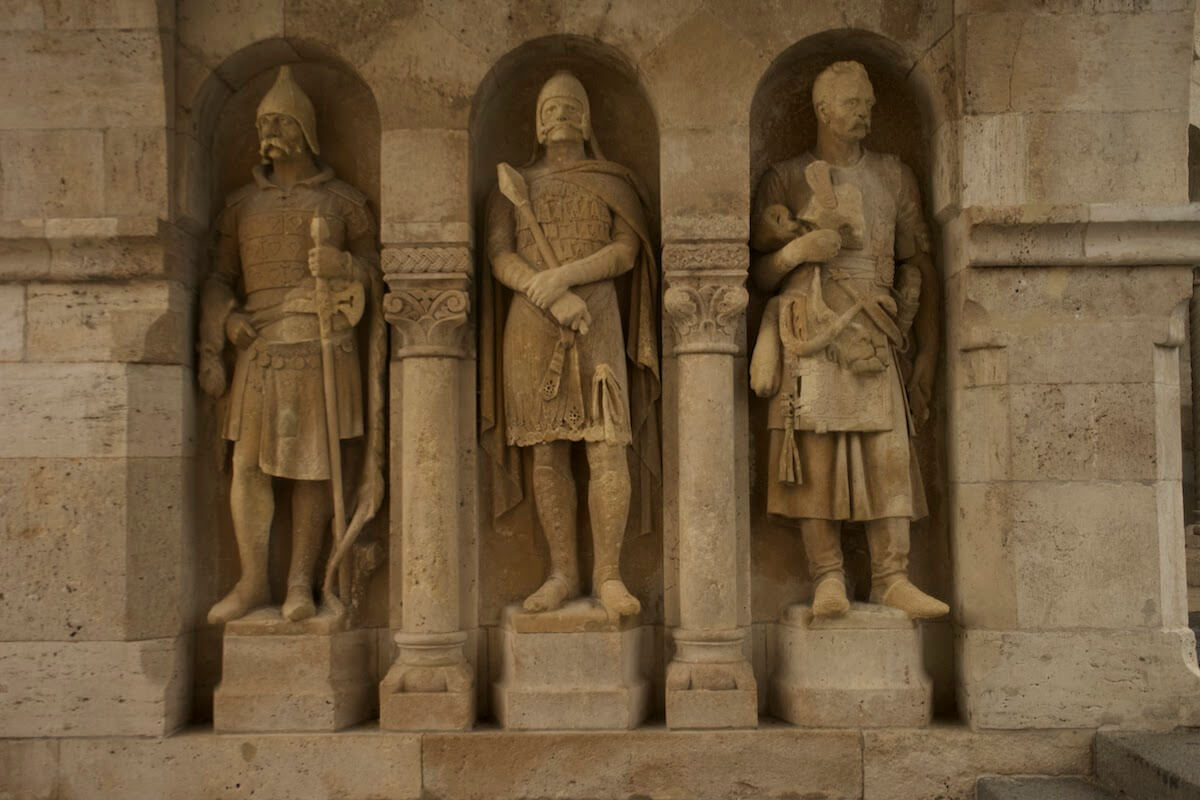 Halászbástya Restaurant is a small restaurant located within the towers of Fisherman’s Bastion. Prices are predictably higher than Budapest averages – you’re paying for the outstanding views and location. The restaurant is open from 10:00 to 22:00. Meals range from HUF 1400 to HUF 9000.

Enjoying the View from Fisherman’s Bastion: What You Can See

The second-longest river in Europe, the Danube is one of the world’s great rivers.

From Fisherman’s Bastion, you’ll get a remarkable view. And if you want to get up close and personal with the Danube, there are plenty of river cruises to enjoy.

Budapest’s most famous bridge, the beautiful Chain Bridge spans the Danube. It was the first bridge to connect Buda with Pest, and today stands as an icon of the city. On the Pest side the river, the Chain Bridge connects with Budapest’s 5th District.

It’s due to close in the near future for restoration work, so catch the view while you can!

Gresham Palace stands at the eastern foot of the Chain Bridge, across the Danube in Pest. Formerly the head office of an insurance company, Gresham Palace is now home to the Four Seasons Budapest. Just as beautiful on the outside as it is inside, today it’s home to one of Budapest’s most luxurious hotels.

St. Stephen’s Basilica is the largest church in Budapest. It strikes an imposing presence in the Pest skyline, making it no surprise you can see it from Fisherman’s Bastion.

St. Stephen’s Basilica is open to tourists every day, except during religious ceremonies. It’s free to enter, or you can pay a small fee to climb to to top for more awesome views!

Just because it’s a copy of the London Eye, doesn’t mean the Budapest Eye is any less fun. A ferris wheel on Elizabeth Square in Budapest’s tony 5th District, take a ride for more great views of the city.

Elizabeth Square is considered the heart of downtown Pest. It’s where the 5th, 6th, and 7th districts all meet, and is a busy transit connection and meeting place.

Budapest’s most iconic landmark, the Hungarian Parliament stands sentry on the east bank of the Danube. Fisherman’s Bastion offers one of the best views – and photos – of the parliament building.

Fisherman’s Bastion is open 24/7, day and night. This makes it a lovely spot for night photography and for catching the sunrise in Budapest! If you’re staying in Budapest Castle District, you’ll likely have the Bastion to yourself at night and early in the morning.

The upper terrace is ticketed during the day, and you’ll have to pay to visit.

It’s free to visit the lower terraces and towers, which offer lovely views in their own right. The entire Bastion is open 24/7.

If you’d like an even better view, you can pay to visit the upper terrace and towers. Ticket cost varies based on time of day and season.

In the low season, between October 16 and March 15, we’ve heard it’s free to enter the upper terraces. Push the turnstile, and you’ll gain access. We haven’t done this personally, so can’t confirm,

Evening visits are also free after 20:00, apparently. Again, just push your way through the turnstiles, which are unlocked in the evenings. Finally, it’s free on August 20, which is Hungary’s national day.

If you have a Budapest Card, you can get a 10% discount on Fisherman’s Bastion tickets.

Getting to Fisherman’s Bastion

Getting around Budapest is generally pretty easy. You have a few options for getting to Fisherman’s Bastion.

Getting to Fisherman’s Bastion by Bus

If you’re coming from downtown Budapest to Fisherman’s Bastion, your best bet is bus #16 from Deák Ferenc tér.

Alternatively, you can take bus #16A from Szell Kalman tér.

Getting to Fisherman’s Bastion by the Buda Castle Funicular

If you don’t mind spending a little more, take the Buda Castle Funicular from Clark Adam Square up Castle Hill. From the funicular terminal in Budapest Castle District, it’s less than 5 minutes’ walk to Fisherman’s Bastion.

If you have a reasonable level of fitness, you can walk to the Castle District and Fisherman’s Bastion. Begin your route at Clark Adam Square (about a 10-minute walk uphill) or Szell Kalman Square (about a 15- to 25-minute walk, some uphill and some flat). 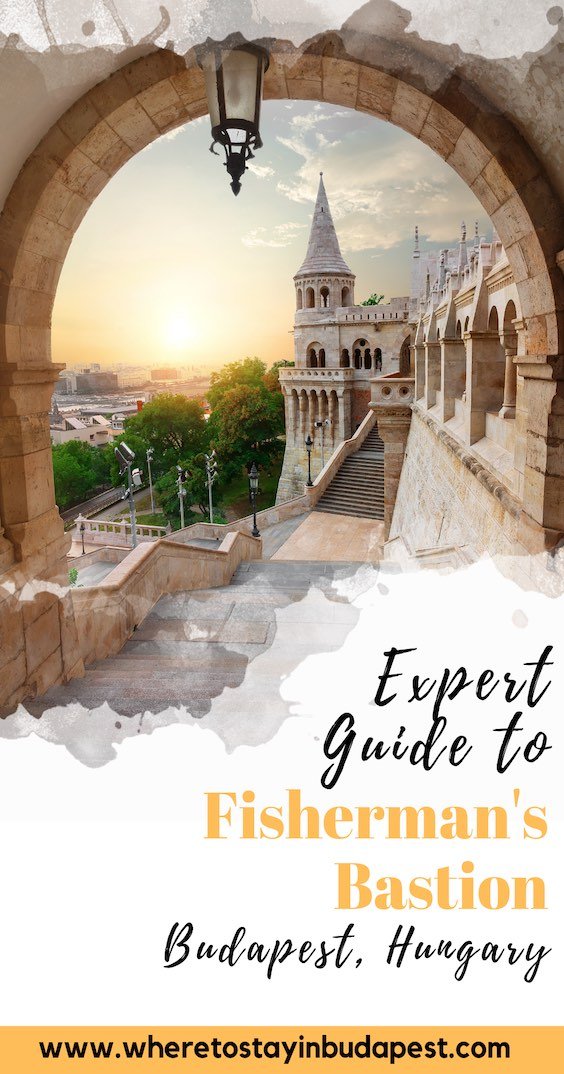 A curated list of current travel deals available to our readers! Updated weekly.

A Local’s Guide to Winter in Budapest: What to Do, Eat, See & Pack for the Perfect Trip

Thinking About Visiting Budapest in Winter? You’re Not Crazy…! This Guide Shares our Best Tips (as Locals Living in Budapest) for Maximizing Your Winter Vacation in Budapest.

Disclosure: This website uses affiliate links. That means we may earn a small commission when you use the links on this site to book a hotel, book a …

A beautiful square in the heart of downtown Budapest, Vörösmarty Square is a popular meeting spot in Budapest city centre and a convenient area of Budapest to stay.